WHAT’S IN A NAME 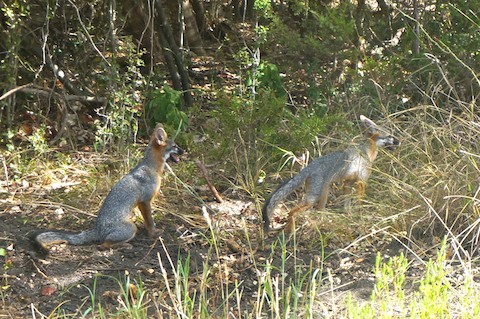 Hello friends! When we’re out at tasting events, the questions people ask the most are why our whiskey is called Swift Single Malt, and where did the fox on the label come from?

Let’s begin with Swift. In Scotland, single malts are most often named after the family or the location of the distillery. We decided to go with Swift, our last name. Nick and I believe in following Irish and Scottish traditions in whiskey making, so it just made sense to honor the family name’s Scottish heritage.

Now, on to the foxes. At the distillery, we have a family of gray foxes living behind our propane tank. We often see them running around the wooded area behind the distillery — mostly we see just ears or a tails as they dart by, but occasionally they sit out in the open just long enough to get a photo. The one above is of the two younger foxes.

When it came time to create our logo, our designer Trina Bentley really liked the foxes. She took inspiration from the fox family, my hair color, the copper tones of the spirit itself, and our fox logo was born. Nick and I are both animal lovers and nature enthusiasts, so it was a perfect choice.